ASML ratio between intrinsic (Graham) Value vs Price over the years

Famed investor Peter Lynch said: "In business, competition is never as healthy as total domination." He might have liked ASML.

For a few years, I have been following ASML and often thought the price was too high based on this type of chart comparing Price and Graham value. It seems like the difference is getting bigger and bigger. 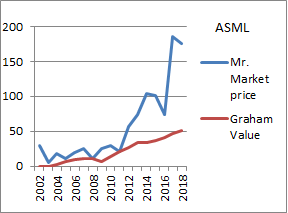 Peter Lynch made charts, comparing stock Price over a number of years with the growth in (15 times) Earnings per share. An important aspect of his charts is that they were logarithmic, which puts a certain annual percentage of growth in a clearer perspective, it also shows that differences are different than they seem. Below you can see that the share was relatively much more expensive in 2007 than during the Price dip in 2016 to 75 Euros. Above the 2016 price seems relatively expensive compared to the 2007 high point... 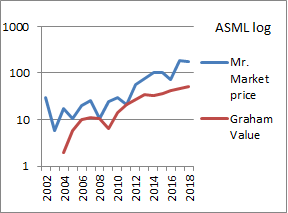 Benjamin Graham Defensive Analysis:
SECTOR: [FAIL] ASML is in the Technology sector, which is one sector that this methodology avoids. Technology and financial stocks were considered too risky to invest in when this methodology was published. At that time they were not the driving force of the market as they are today. Although this methodology would avoid ASML, we will provide the rest of the analysis, as we feel times have changed.SALES: [PASS] The investor must select companies of "adequate size". This includes companies with annual sales greater than €260 million. ASML's sales of €9 053 million, based on 2017 sales, pass this test.CURRENT RATIO: [PASS] The current ratio must be greater than or equal to 2. Companies that meet this criterion are typically financially secure and defensive. ASML's current ratio €9 096m/3 132m of 2.9 passes the test.LONG-TERM DEBT IN RELATION TO NET CURRENT ASSETS: [PASS] For industrial companies, long-term debt must not exceed net current assets (current assets minus current liabilities). Companies that meet this criterion display one of the attributes of a financially secure organization. The long-term debt for ASML is €4 700 million, while the net current assets are €5 964 million. ASML passes this test.LONG-TERM EPS GROWTH: [PASS]  Companies must increase their EPS by at least 30% over a ten-year period and EPS must not have been negative for any year within the last 5 years. EPS for ASML grew 256% during the past 10 years. The company passes this criterion.Earnings Yield: [FAIL] The Earnings/Price (inverse P/E) %, based on the lesser of the current Earnings Yield or the Yield using average earnings over the last 3 fiscal years, must be "acceptable", which this methodology states is greater than 6,5%. Stocks with higher earnings yields are more defensive by nature. ASML's E/P of 3% fails this test.Graham Number value: [FAIL] The Price/Book ratio must also be reasonable. That is the Graham number value must be greater than the market price. ASML has a Graham number of √(15 x €4,9 EPS x €23,36 Book Value) = €51
DIVIDEND 1,4/175 = 1%

Conclusion: ASML is a profitable growing company, but the stock price has outpaced the company's per share intrinsic value.

Note: ASML stock holders who focus on price and earnings growth should be quite happy with the results over the past years: