Warren Buffett's Rules Nr. 1,2 & 3? In the light of the “THE ERGODICITY PROBLEM IN ECONOMICS"


Summary of the article by Ole Peters in Nature, December 2019

Ole Peters is a Fellow at the London Mathematical Laboratory. In December 2019 he wrote a paper in Nature (TheErgodicity Problem in Economics) that sheds light on human behavior that deviated starkly from model predictions. Scientists assumed that the models were correct, and people were irrational, but it turns out the “experts” themselves had been making a relatively simple mistake for centuries. You can argue they had a “bias bias”.

You might have heard of The Loss Aversion bias?
“Loss aversion is a tendency in behavioral finance. It also includes the subsequent effects on the markets. It focuses on the fact that investors are not always rational where investors are so fearful of losses that they focus on trying to avoid a loss more so than on making gains.” Source https://corporatefinanceinstitute.com/

Ole Peters argues that people aren’t as irrational as many psychologists, behavioral economists and the Corporate Finance Institute think. That has to do with the fact that scientists have overlooked the importance of time when calculating the expected values of decisions.

In business, investing and things like farming, what you own today and how that changes has an effect on how much money you can make tomorrow. There can exponential growth, but not if you regularly lose a large percentage of your wealth. Recall what Warren Buffett and Charlie Munger teach: Buffett’s Rule Nr. 1 “Don’t lose money intrinsic value.” (Rule Nr. 2 Don’t forget Rule Nr. 1).  Charlie Munger: “If you don’t get elementary probability into your repertoire... you go through life like a one-legged man in an ass-kicking contest.”

Since the 17th-century models of probability have been heavily influenced by The Unfinished Game played by Fermat and Pascal. Before their time people assumed you couldn’t predict the future in any manner, it was basically in God’s hands. Once you believe you can calculate the future probability of something happening it becomes relatively simple to calculate the “expected value” of taking a gamble. You can predict outcomes with some certainty. Christiaan Huygens, for example, applied probability theory to calculate life expectancies and helped his compatriot Johan de Witt, the leader of the Dutch government, to sell the first life insurance.

(This leads to a possible Warren Buffett Rule Nr. 3 “Own insurance companies.”  😉)

Based on Fermat and Pascal’s work, we can calculate the “expected value” of taking a risk. For example, if you wager $10 and toss a coin where you have a fifty percent chance of winning an extra 50% ($5) and a have a fifty percent chance of only losing 40% (- $4), then tossing the coin gives you an expected value of $5 - $4 divided by 2 possible outcomes = 50 cents extra wealth. In other words, the “expected value” every time you do this coin toss is 5% of the wagered amount.

Theoretically, if you want more money, you would be an idiot if you could wager most of your wealth on a bet like this and decided not to. Every time you flip, your “expected value” is a 5% increase. In practice most people wouldn’t. This failure of the expected wealth model to describe actual human behavior was called the “St. Petersburg Paradox”.

In the 18th century Daniel Bernoulli came up with a reason in his book “Exposition of a New Theory on the Measurement of Risk”: when people decide whether to take part in a gamble, they don’t consider the expected changes in wealth, x in $s, but the expected change in the usefulness of wealth;  (u)x utility. 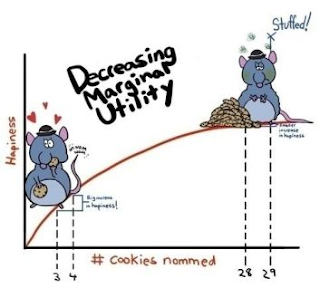 If you already have wealth, gaining 50% extra is considered less valuable than losing 40%. Flipping the coin has an expected positive monetary value but because of risk aversion and the decreasing usefulness (utility) of more wealth, the flip has a negative “expected utility”.

Almost two centuries later, in 2019 Ole Peters pointed out that Bernoulli and others hadn’t thought about the effect of time and repeated decisions. In an “non-ergodic” system the outcome of today depends on what happened yesterday. If you wager all your money repeatedly on this coin toss (that has a positive “expected value” every time) you will lose money over time instead of earning it.
Consider starting with $10 and then Winning, Losing, Winning, Losing, Winning and Losing:
$10 x 1,5 = $15 x 0,6 = $9 x 1,5 = $13,5 x 0,6 = $8,1 x 1,5 = $12,15 x 0,6 = $7,29
This is a “multiplicative” result. Yesterday’s output is today’s input. It is obviously not growth optimal even though the “expected value” of a single toss is positive. Peters argues that if your result is “multiplicative” (as it is in investing) then risk aversion is a lot more logical than most psychologists and economists think.

The blue line x = theoretical “expected value” of 5% per toss which leads to exponential growth. (Note the logarithmic scale of Wealth in $.)  The red line is the actual multiplicative ergodic result for the process over time. 150 individual trajectories are shown, each consists of 1,000 repetitions.

Another way of taking the bet is “additive”. Instead of betting all your wealth you bet a small fixed amount say $1 instead of all $10 and then add up the results: This will increase your wealth (slowly not exponentially).

Every time, you decide not to take this bet you incur an Opportunity Cost of 5 cents “expected value”.  (See also Kelly Formula in further reading below).

A third way to take the bet is as an “ensemble”, you bet small amounts in parallel:

Peters conclusion: “In the early days of probability theory there was a firm belief that things should be expressed in terms of expectation values. For that to make any sense in the context of individuals making financial decisions, something had to be created. Expected utility theory – unknowingly, because ergodicity hadn’t been invented – did just that. But because of the lack of conceptual clarity, the entire field of economics drifted in a direction that places too much emphasis on psychology (irrationality and biases).”

In practice, Buffett has avoided “Catastrophic Risks” in investing, that is anything that entailed a significant risk of losing all the money invested in it (such as startups). His “multiplicative” perspective shines through in quotes like this “Over the years, a number of very smart people have learned the hard way that a long string of impressive numbers multiplied by a single zero always equals zero.”

Note from Ansgar John Brenninkmeijer (who wrote this memo): I believe you should distinguish between “intrinsic value” and “quoted value” when saying “Don’t lose money.” It might be better expressed as Don’t lose intrinsic value. Both Buffett and Munger have said they are not concerned about dips in “quoted value” i.e. what most people would consider losing money. A 50% fall in Berkshire Hathaway’s share price in the future is something Buffett says you should expect. For an outsider, it might seem like Buffett and Munger don’t suffer from a risk aversion bias because they aren’t worried about share price crashes, but I believe their perspective is different and more along the lines of Ole Peters. They keep score by trying to limit losses of intrinsic value and keeping opportunity costs as low as possible.