Today August 19 I penciled my guesstimate of the second wave of Covid19 for The Netherlands.  My guesstimate AJB: Ansgar John Brenninkmeijer. 5 000 excess deaths, population adjusted based on Swedens 2020/2021 scenario of 3 000 deaths. Curve shape should be Gompertz but isn't. Data at the moment isn't conducive for making an estimate because the number of Covid 19 mortalities is so low. I am curious whether we will see the result of the 2020 heatwave on Thursday the 19th in weekly update.
Tracking results here. https://www.rivm.nl/monitoring-sterftecijfers-nederland 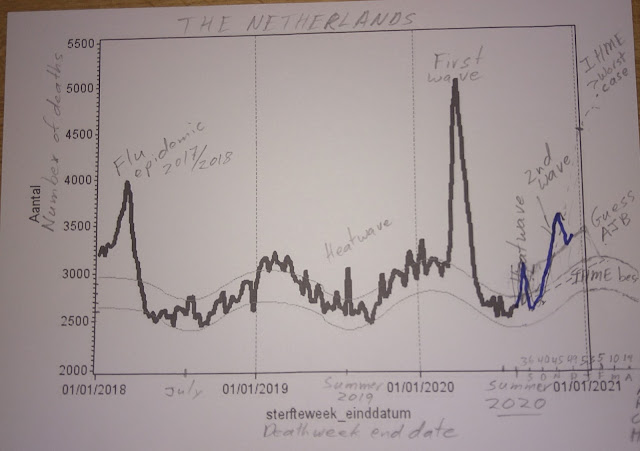 Update November 7th: Police staat, not allowed to meet more than 1 other person on the street... Excess deaths week 22-28 oktober 2020 3448-2951 = five hundred excess deaths in The Netherlands in one week.
Update October 16 Partial Lockdown2 in The Netherlands starts for 4 weeks. Scientific community split between Great Barrington Declaration (go to endemic) versus John Snow "herd immunity" is a fallacy.
Update August 27 Record heatwave very visible: As expected. Three to four hundred more deaths than usual in the summer.
A "government" plan published at the end of June:
https://www.lnaz.nl/cms/files/opschalingsplan_covid-19_def.pdf  predicts 1/2 the number of Intensive Care beds needed at the peak for Covid care 650 versus 1 378 beds in the spring of 2020.
Coronaviruses are seasonal in northern Europe. Asknow nobody knows how many people die of old age every year in combination with rhinovirusses or conventional coronavirusses. What we do know is that in general 200 to 300 more people die everyweek in the winter and this winter the authorities will keep track of COVID19 deaths which will probably increase. The best-case scenario (IHME) is deaths measured but bottom line no statistically relevant excess deaths. Track here: https://covid19.healthdata.org/netherlands
In the winter, a lot more people get sick and die every day in The Netherlands. SARS-COV-2 which causes has been killing about 1 person a day during the summer, so it would be perfectly normal if 5 people per day, 35 per week died of it during the winter. (Based on acute respiratory complaints increasing fivefold between week 33 and December/January/February).

Advice on how to get through the winter written down by Prof. Martijn Hoogeveen.
It might be higher, it might be lower depending on #groepsimmuniteit #herdimmunity there isn't 1 threshold or immunity "tipping point" it seems to be more of a spectrum.
Dutch Government explanation:
Note September 28th 2020: "Diederik Gommers of the Dutch Association for Intensive Care expects that 400 to 700 covid patients will be in intensive care in two weeks. (Check: October 14th 2020)"
Update September 24th: No increased deaths up to September 16th. In fact 124 deaths lower than the upper line. In the week up to September 22nd 33 corona deaths were reported in the Netherlands. So the report next week should be normal. The week after that up to the 29th guesstimate: 112 deaths so around the upper line.
Note September 22nd: Immunity on Page 10 of the Dutch Government report: https://www.tweedekamer.nl/sites/default/files/atoms/files/20200922_technische_briefing_vws_jaap_van_dissel.pdf
Note: Exponential "forecast" for the end of October:
Martijn Broekman
@TijnBroekman
Level 2:
Replying to
@mzelst
Analyse van 22/09 Opnieuw een stijging van het groeipercentage en dat is geen goed nieuws. De verdubbelingstijd is nu iets meer dan 10 dagen. Dat betekent 8x zoveel besmettingen over een maand bij gelijkblijvende groei. Ofwel bijna 20.000 per dag eind oktober.
Note September 1st:

Florida Gov. Ron DeSantis: "We will NEVER do any of these lockdowns again." pic.twitter.com/YxJh2nxiV3

Note: 31st of August: Tweet Prof. Francois Balloux: "The reduction in #COVID19 mortality has multiple explanations: Improved treatment; younger demographic infected; possible 'mortality displacement'; likely role of 'infectious dose' (sometimes incorrectly referred to as "viral load"). And the virus' virulence didn't significantly change."
First wave:
The Netherlands Retrospect: RIVM terugblik "In the winter of (2017/2018), mortality was increased for 15 weeks (weeks 51 2017 to 14 2018). The increased mortality rate coincided with the flu epidemic that occurred from week 50 2017 through week 15 2018. The mortality rate during the 18-week flu epidemic was estimated at 9,444 (8,885 for the entire winter period from weeks 40 to 20). This was the highest mortality rate ever measured since the start of the monitoring in 2009. The mortality mainly affected people aged 75 years and older, but there were also several weeks in which the mortality was increased in people between 55-64 years and 65- 74 years.
A brief resurgence of the flu epidemic in weeks 10 and 11 2020 overlapped with the first 2 weeks of the COVID-19 epidemic. The mortality rate in weeks 10 to 19 of the COVID-19 epidemic was 9,768, of which 213 were in the first 2 weeks. 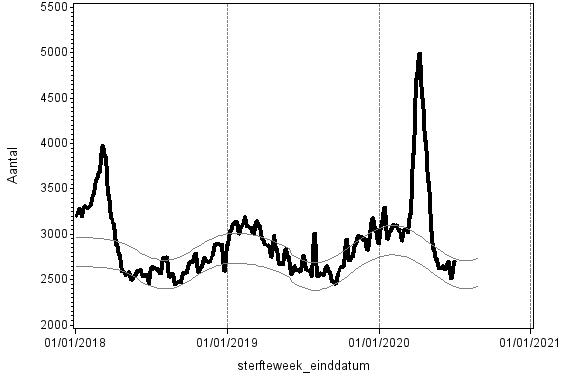 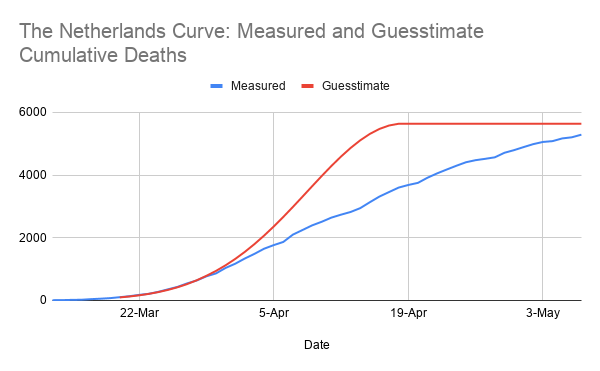 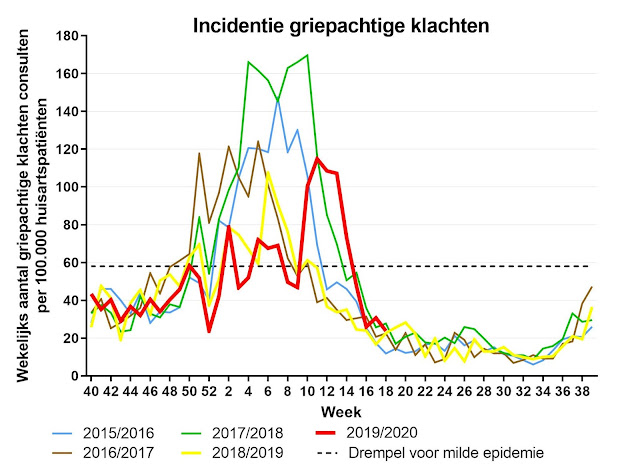 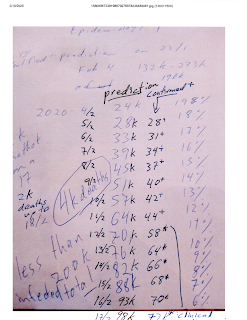 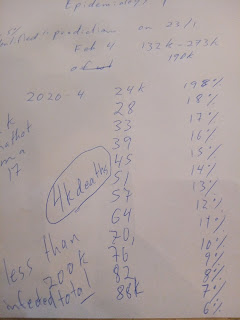